It was so exciting to be a part of this! Sonja Scharles, our President, was there to accept the check and Jack Faherty, our VP and Marlene Cleaveland, Program Coordinator, were there as well.

To provide a bit of history on Dollar General, the store was founded by a young man (J.L. Turner) who lost his father at a very early age and had to drop out of school to help work at home with the family. He could not read or write but went on to develop these stores. In 1988, President Ronald Reagan honored Dollar General for its literacy program and in 1993, the Dollar General Literacy Foundation was established. Dollar General strongly supports literacy. In fact, the Bryans Road Dollar General is the #1 store out of 8200 stores nationwide to collect the largest amount of money (collected through coin cans at their stores) which is then distributed to organizations promoting literacy for children and adults. Last year, his store (#2696) collected $31,211,86. As Mr. Routh pointed out today, every penny that is collected counts and that is why they did not round off the total figure.

We are very honored to have been selected this year to receive a grant in the amount of $5,000.

We encourage you to shop at the Bryan's Road Dollar General (located in the same shopping center as Safeway) off Route 210 in Indian Head Maryland. And while you're there, take the time to thank Mr. Bill Black for all he and his store employees do to help promote literacy. 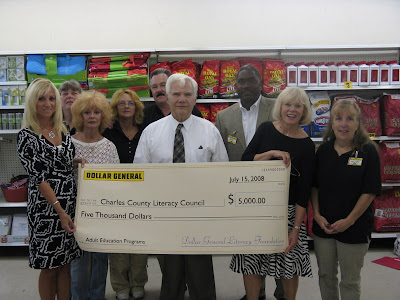