Our annual Borders gift-wrapping fundraiser is taking place Tuesday, December 8 (from 3:00 p.m.-8:00 p.m.) and Wednesday, December 16 (from 10:00 a.m.-8:00 p.m.) at the Borders Bookstore in Waldorf, MD. CCLC volunteers will wrap customers’ gifts/books for free during these periods (donations will be accepted.) These funds help cover costs for new tutor and student books. We have spent almost $3,000 on tutoring and student materials this year. Drop by to say hello or get your book shopping/gift-wrapping taken care of.
Posted by Admin at 11:49 AM No comments:

The Charles County Literacy Council has just completed the Fall 2009 Volunteer Tutor Training workshop (October 27-29) chaired by Sonja Scharles, CCLC President. We graduated 19 tutors ranging in age from 24 to 75. All are excited and ready to tutor. Tutor-student matching is in progress. A million thanks to Sonja and all the presenters for a magnificent workshop. The presenters included Sonja Scharles, Art Payton, Jack Faherty, Michael Ellis Jeanette Madison, Deryl Danner, Sr., Mary Jones, Meg Overbey, Elizabeth Sinnes and Mary Vargo. Thanks also to Renard Johnson, Shirlene Savoy and Christy Washington who worked at the greeter table. We received an array of positive comments from the newly trained tutors on their evaluation forms and welcome them. Special appreciation and thanks to Darlene Adams, Board Treasurer for planning and overseeing dinner for the workshop. We also received $171.00 in donations during the workshop from new tutors. These funds will help offset costs associated with materials for future workshops. Thank you new tutors!
Posted by Admin at 11:48 AM No comments:

If you would like to become a volunteer tutor with the Charles County Literacy Council, please go to our Events Page to register for the next tutor workshop. Space is limited.
Posted by Admin at 11:47 AM No comments:

Charles County Literacy has moved its headquarters to 10250 La Plata Road (Route 488), La Plata, MD 20646. Our office is inside the United Way Building. The new phone number is 301-934-6488. There will still be a Waldorf location for pick-up/drop-off of books for tutors who work in DC or live in Waldorf as well as assessment and tutoring locations in Waldorf. For more information, you may contact the office by phone or email, charlescountyliteracy@comcast.net

We held our first meeting of the season on Tuesday, September 1 at our new office location in the meeting room. Several tutors also attended and provided great input. Plan to join us on the first Tuesday of every month at 7:00 p.m.-8:30 p.m. at 10250 La Plata Road, Waldorf, MD 20646 (meeting room). The next meeting will be held on Tuesday, October 6, 2009.
Posted by Admin at 11:47 AM No comments:

The Charles County Literacy Council participated in this year’s Charles County Government Day “Go Green” at the Government Building in La Plata, MD on Saturday, May 9. Sonja Scharles, President, Marlene Cleaveland, Program Coordinator, Deryl Danner, Sr. and Mary Jones, both newly trained tutors, helped occupy our CCLC display table. The event was hugely successful with many vendors and local charities and organizations present, including the United Way, with which we are a partner agency. We talked to many visitors who were interested in either being tutored or becoming a tutor themselves. We also made contact with several organizations we plan to include in our outreach initiative efforts.

The Dollar General Literacy Foundation awarded a $3,000 grant to the Literacy Council on April 28, 2009 at the Dollar General store (store # 2696) in Bryan’s Road, MD. The check was presented by Jackson Routh, Corporate Community Initiatives Administrator. The Bryan’s Road Dollar General in Indian Head, MD is managed by Mr. Bill Black, and has been voted number one in the Nation for the past five years for the most monies collected for literacy. This year, the store collected $28,956.88 in literacy donations. Since 1993, the Dollar General Literacy Foundation has awarded $27.6 million dollars in grants. CCLC is honored to have been selected this year to receive a grant, along with local schools. 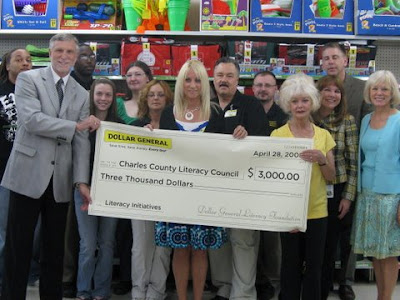 Congratulations to our newly trained volunteer tutors! We just completed our three-evening tutor workshop on March 26, 2009 training 25 new tutors! Many thanks to our amazing Workshop Chair, Nicole Bennett and all the presenters for doing a fabulous job. We have already begun the process of matching the new tutors with waiting students. The workshop was one of our best; we even had a waiting list and a few that will have to wait until the October training. Please check our events page for upcoming information on our Fall workshop.

We also had a fantastic time at the first tutor-student appreciation potluck held at Good Samaritan Presbyterian Church on March 28, 2009. We presented our tutors and one attending student with appreciation certificates and other gifts to thank them for their generous tutoring and other volunteer hours. Charles County Commissioner Samuel Graves, Jr. also attended and presented each tutor with a Charles County lapel pin; LifeStyles of MD Program Director, Dana Harty also attended with several guests. Many thanks also to our Board of Directors for helping us put all of this together, including providing many delicious dishes as well as the tutors who brought dishes; special thanks to Sally Brandt for offering her church as a location for this event. We appreciate all of you!
Posted by Admin at 11:45 AM No comments:

We are having a Tutor-Student Appreciation Potluck on Saturday, March 28, 2009 from 6:00-8:00 p.m. at the Good Samaritan Presbyterian Church in Waldorf, MD. All CCLC tutors are invited to attend and bring their students. We have mailed out invitations and hope that you can join us. RSVPs should be in no later than Friday, March 20, so we can plan accordingly. We look forward to seeing you there. Please call the office at 301-870-5974 if you have not received an invitation.
Posted by Admin at 11:44 AM No comments:

Would you like to teach adults in Charles County to read, write, do basic math, learn English as a Second Language or provide help teaching English to speakers of other languages? We are changing lives for the better. Help continue to make Charles County all it can be. We just concluded our Spring volunteer tutor workshop. We will conduct another tutor training workshop in October 2009 (dates have not been finalized, yet.) Once dates are set, you may register online or email at charlescountyliteracy@comcast.net; For further information, contact Marlene Cleaveland at the CCLC office at 301-870-5974.
Posted by Admin at 11:44 AM No comments: